The Configuration Manager 1910 update is available as an in-console update. There is NO SCCM 1910 baseline version.

SCCM 1910 is the third current branch release of this year. I am excited to see what would be the next version of Configuration Manager. When you see a new update version, it remains in support for 18 months from its general availability release date.

With Configuration Manager 1910 update, the product will receive Security and Critical updates for first four months. And for next 14 months, it will receive only Security Updates. The below SCCM servicing support pic should give you a clear idea of servicing phases.

There are several new features in SCCM 1910 update. Most of the features were already part of technical preview builds. You can read about all the new features of Configuration Manager 1910 here.

Here are some of the prerequisites checklist that you need to look into before you install Configuration Manager 1910 update.

After the release of SCCM 1906, there were several hotfixes released. Probably you may not have installed any or installed just few hotfixes. I often get this question in comments section whether to install these hotfixes first and then install SCCM 1910 or can we skip these hotfixes.

Answer – A hotfix contain either one individual fix or a bundle (a rollup of fixes). All the hotfixes released for Configuration Manager 1906 will be included in SCCM 1910. So if you see any hotfixes in your console while installing version 1910, you may skip them and directly install 1910 update.

This step-by-step upgrade guide contains all the information that should help to upgrade to SCCM 1906. I have split the big process into steps. This should make it easy for you to perform the SCCM 1906 upgrade.

This guide will be added to SCCM Current Branch Guides and you can download the PDF file soon.

First of all the Configuration Manager 1910 update will not be available for everyone yet. It should take few weeks while the Configuration Manager update 1910 gets rolled out globally. Until then you can either wait for the update to be globally available or run the EnableEarlyUpdateRing 1910 script to enable fast ring for 1910 update package in ConfigMgr Current Branch.

You can download the EnableEarlyUpdateRing 1910 PowerShell script by clicking this link. This script will allow you to enable fast Update-ring in ConfigMgr Current Branch.

On your SCCM server, run the PowerShell as administrator and run the script. Enter the site server name (Top level site server name or IP address) and script gets the update 1910 in console for you.

You can monitor the update download by opening dmpdownloader.log file. At this point if your SCCM 1910 update gets stuck in downloading state, here is a post to help you – https://www.prajwaldesai.com/fix-sccm-update-stuck-downloading-state/. 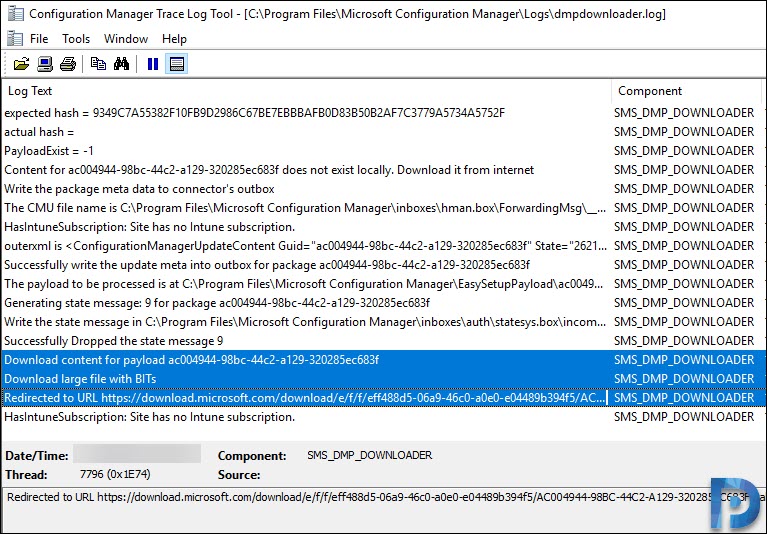 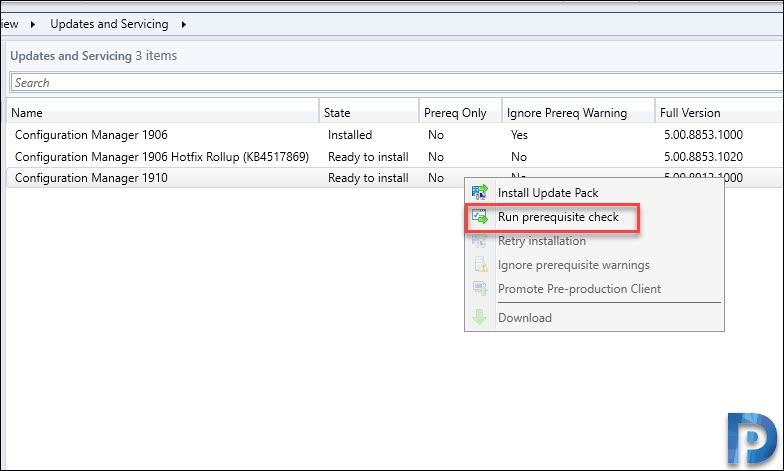 I always recommend running the prerequisite check before installing the update. In my case I got one warning during prerequisite check. Site Database has a backlog of SQL Change Tracking Data, the solution is available in below links.

Listed below are some of common reasons why the prerequisite check fails. Click the Solution to fix the warning. 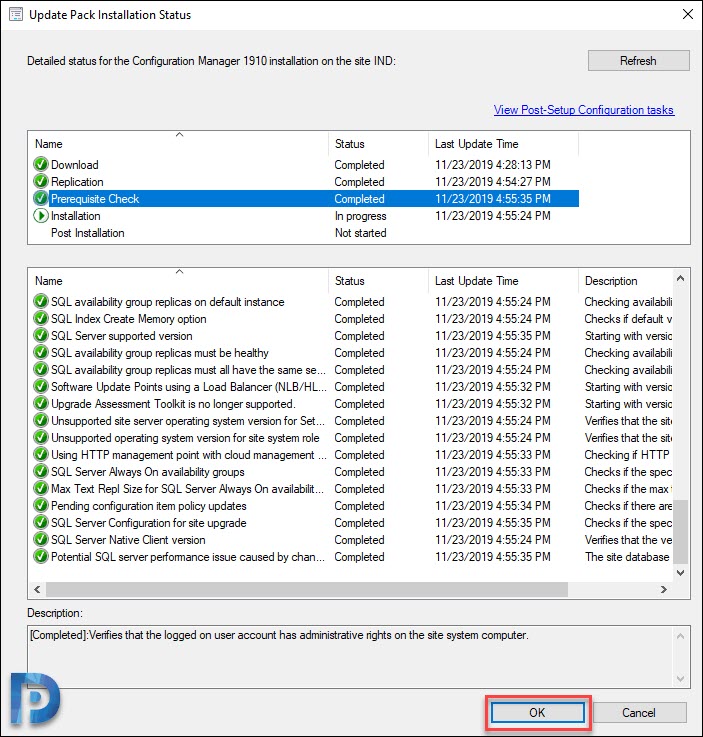 To begin the SCCM 1910 Upgrade Process 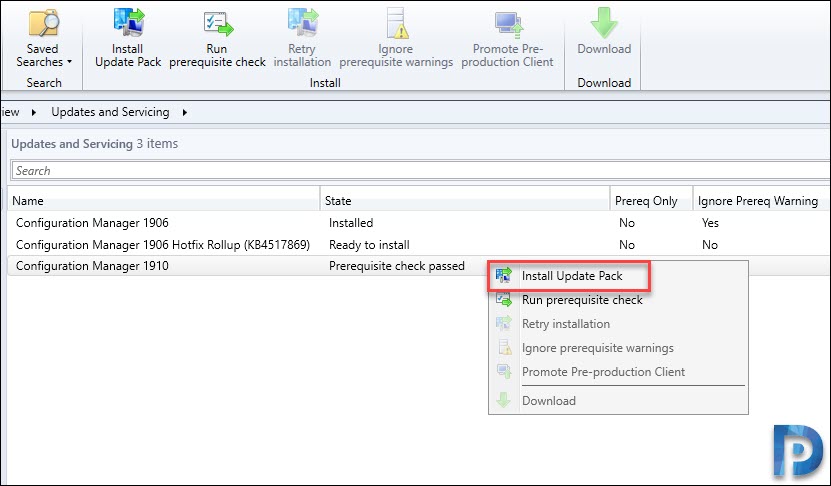 Since my prerequisite checks were completed successfully, I am just going to click Next. 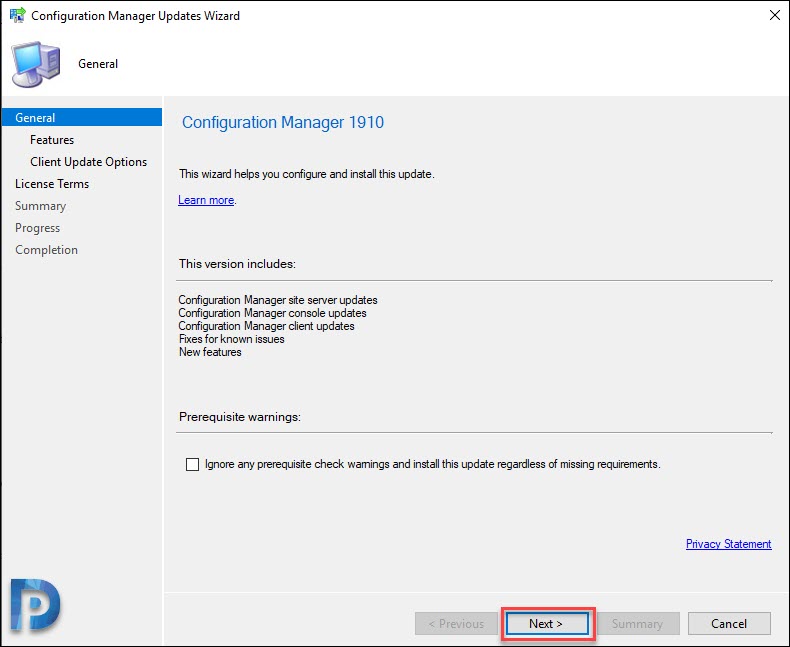 BitLocker Management is one of the new feature is version 1910, we will enable it later. Click Next. 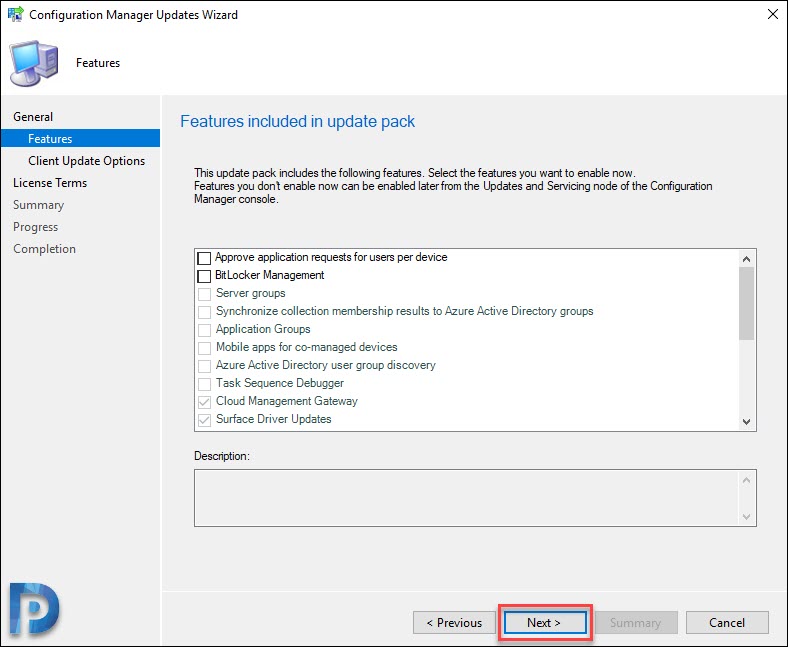 Under Client Update Settings, choose the desired option and click Next. 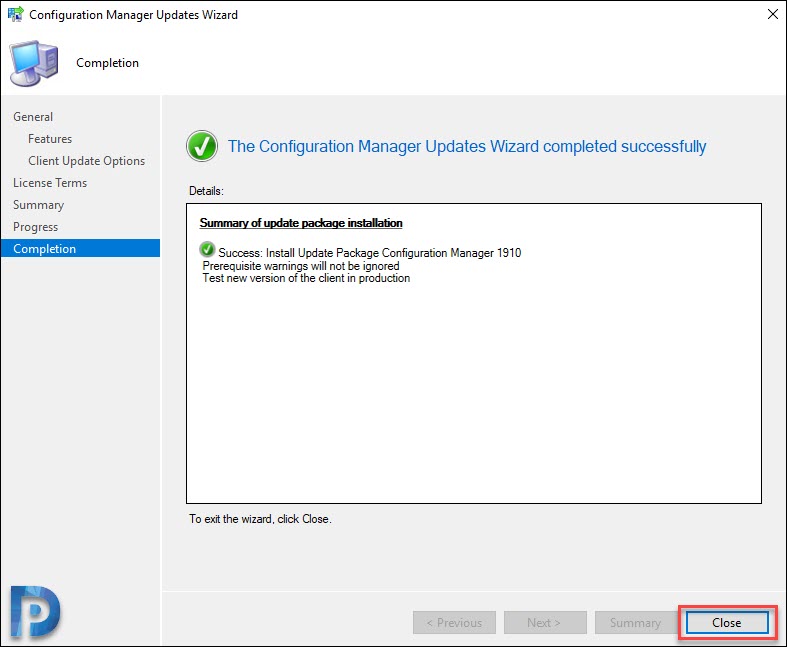 To monitor the update 1910 installation 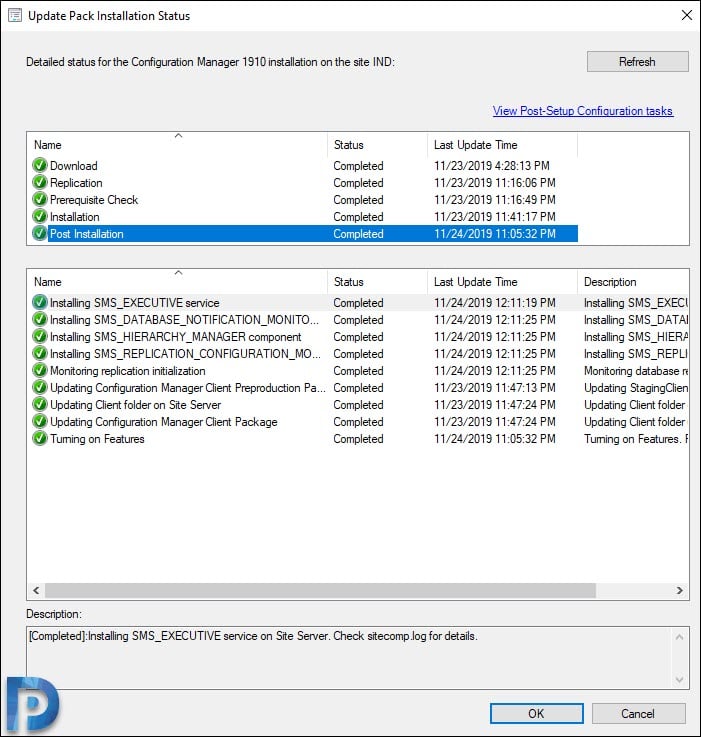 In addition to above method, you can also monitor the update installation status by opening cmupdate.log. 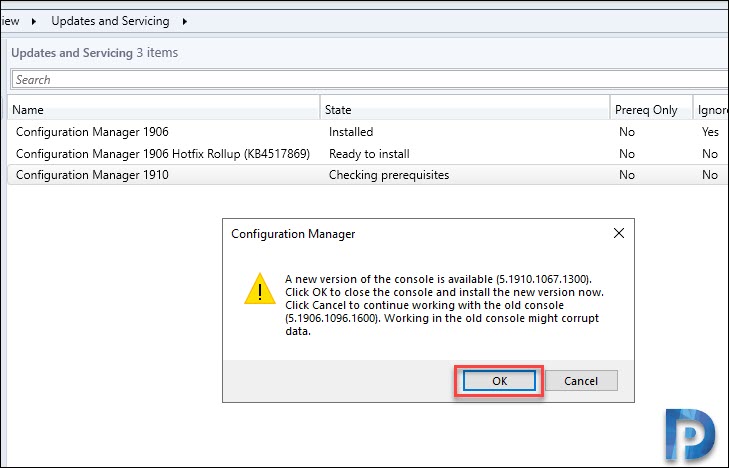 The console upgrade completed successfully. Click drop-down at top left corner of console and click About Configuration Manager. This should show following details. 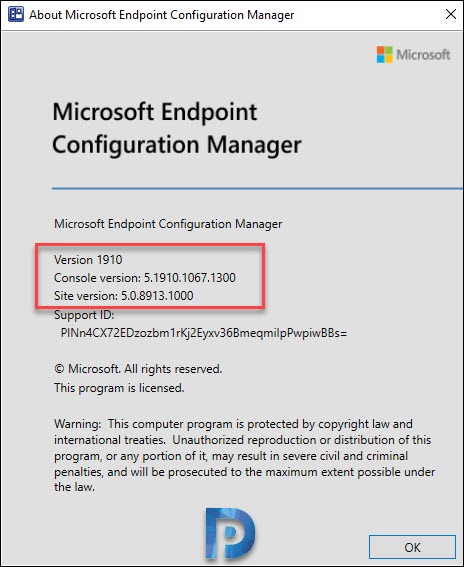 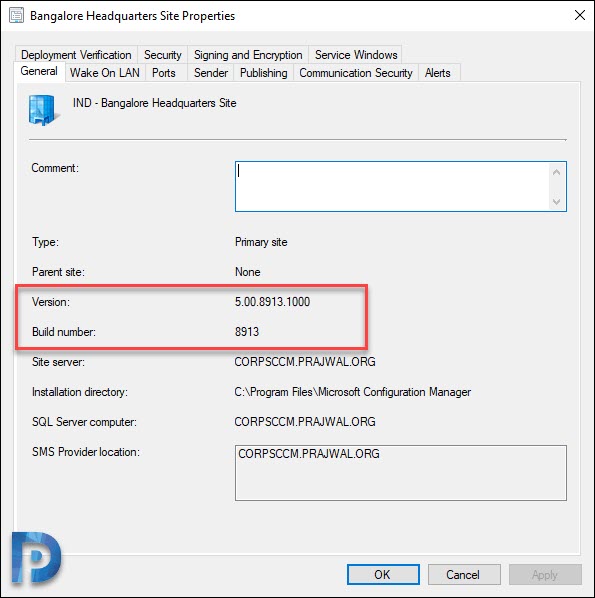 To take full advantage of new Configuration Manager features, after you update the site, also update clients to the latest version. Sometimes the admins skip this step and as a result, after the upgrade, they don’t see the new features. You can upgrade client agents using client upgrade feature. 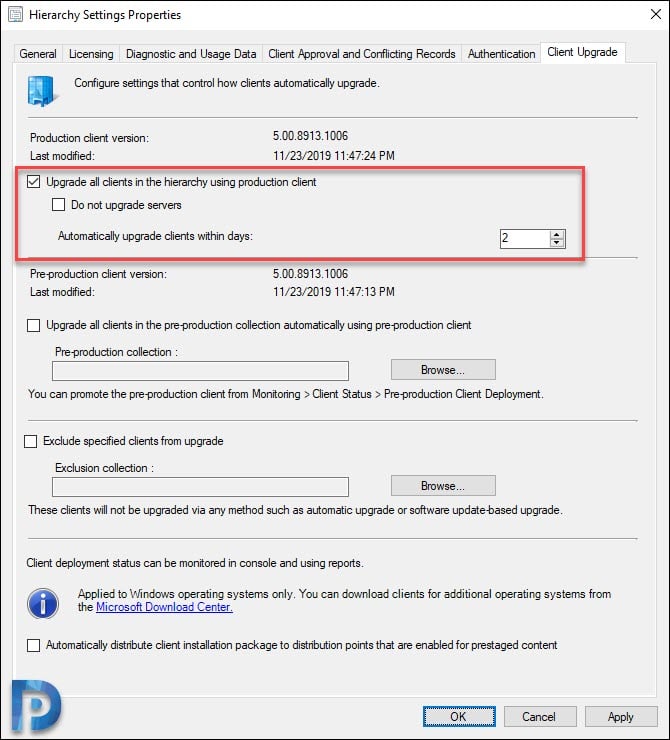