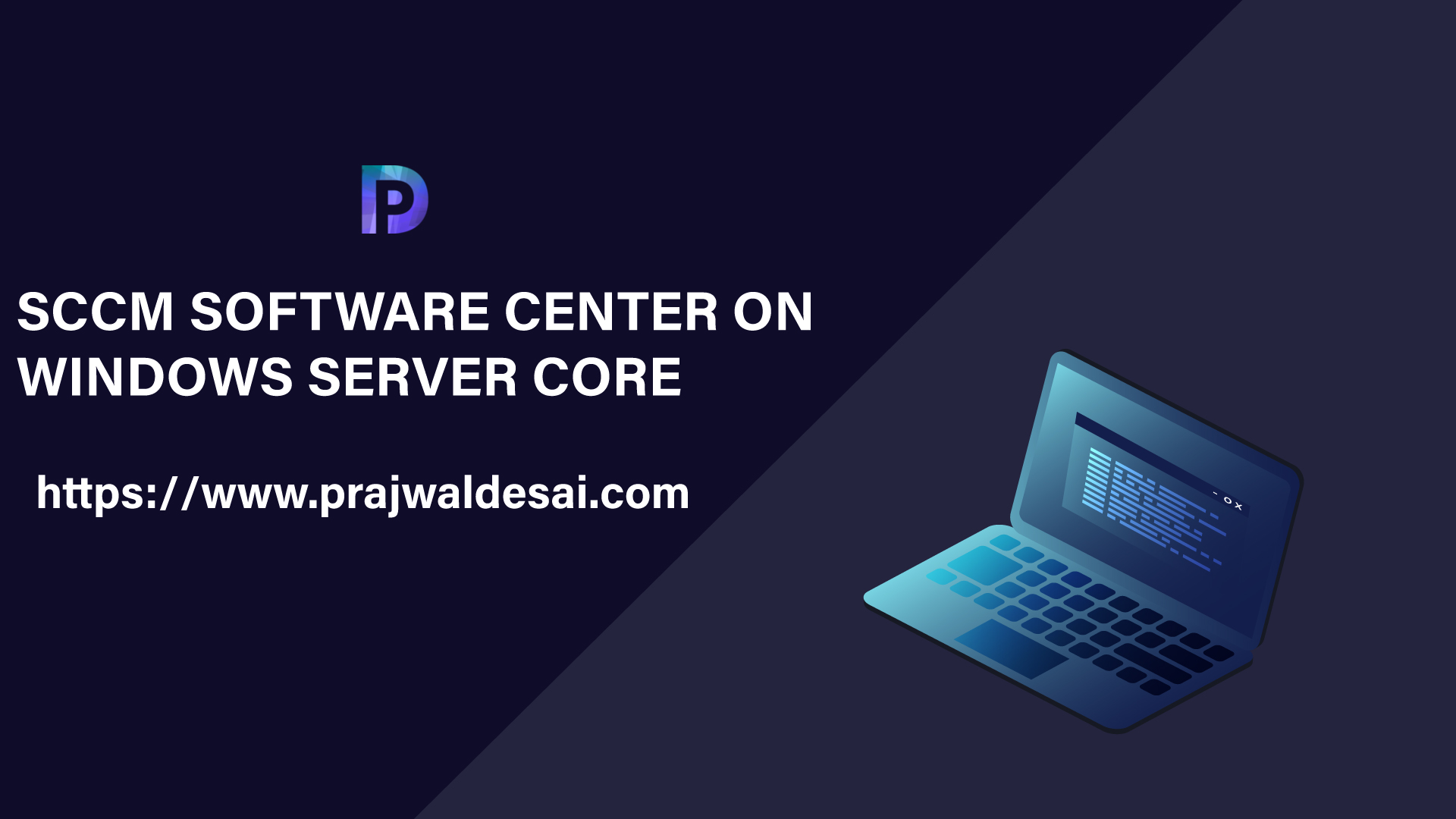 Launching the SCCM software center on Windows Server core is really interesting. I had not tried that before because my lab setup usually consists of Windows Server OS with GUI.

In this post I will share my experience with new SCCM software center app on Windows Server core OS.

Last week I created a VM and installed Windows Server 2019 – Server core. You might find it not that interesting to work on Core OS. That’s because unlike Server OS with GUI, you don’t get the most options quickly. It’s more of using commands rather than GUI options.

Note – According to Microsoft “The new Software Center app isn’t supported on any version of Windows Server Core“. Now why isn’t the new software center app supported ?. I will also cover about it.

In my previous post I covered on SCCM client installation on Windows Server core. That was pretty easy as the client agent can be installed with a simple client push.

Once you install the SCCM client agent on a computer, you can launch the ConfigMgr Software Center using multiple ways. You can either run a shortcut command softwarecenter: or click Start > type Software Center and launch it.

Now both the above methods will not work in Server Core since you don’t have a Start button nor the softwarecenter: command works.

Tip – An interesting post – how to create shortcuts for ConfigMgr Software Center.

If you want to launch SCCM Software Center on Windows Server Core OS, you may try the below steps.

That’s because I was launching the old Software Center. To load the new Software Center, ensure you launch the SCClient.exe from C:\Windows\CCM\ClientUX folder.

In the new Software Center that you just launched, you can perform or check Device Compliance. This  evaluates the device’s settings against the security policies defined by your IT admin.

You will find the Device Compliance option only in new Software Center app.

If you read this article Microsoft clearly mentions that The new Software Center app isn’t supported on any version of Windows Server Core. There is no more explanation to that.

Well, I could launch the new Software Center app on Server core without any issues. Then why is it not supported ?. Here is my understanding.

Suppose if you click any of the Custom Tabs, you will see an array of message boxes. Software Center can not be loaded. There is a problem loading the required components for Software Center. You can try launching Software Center at a later time.

The more you click OK button, the more it launches the new message boxes.

If you are unlucky, the server may restart and show a BSOD which you don’t want to happen. So never click Custom Tabs in software center on Server Core.

Before installing any new application from Software Center, let me check the list of applications already installed. I am using wmic product get name to list all the installed apps.

It’s time to load the new Software Center app. I am going to test the 7zip installation.

With the above test, I cannot conclude that you can install any apps. The above one was done to test if the app installs on Server Core or not. If the app is completely GUI based then you may not find it useful in this case.

In case of Windows Server core, you can run the command control smscfgrc to launch the SCCM properties. From there you can click Actions tab and run the action cycles. All the other tabs that you normally see under Configuration Manager Properties are available.

As I explore new things about this topic I will update this article.

Subscribe to our newsletter
Sign up here to get the latest posts delivered directly to your inbox.
You can unsubscribe at any time. Fake email addresses will be deleted.