CMUpdateReset tool helps you when your SCCM update has download problems. This SCCM update reset tool is also known as CMUpdateReset.exe tool. When the SCCM update is stuck in downloading or replicating state tool to reset Configuration Manager update.

I usually get lot of questions from people when it comes to installing the ConfigMgr current branch updates. Especially when SCCM 1810 update was released, most people reported that SCCM update download was stuck.

A typical suggestion that you might see in forums is to restart the SMS_EXECUTIVE service. However for most of them that doesn’t work.

When you open dmpdownloader.log you might see this following lines of code.

So let’s understand what is this CM update reset tool for SCCM and how to use CMUpdateReset Tool to fix the Configuration Manager update download issues.

Starting with SCCM 1706, Microsoft included CM update reset tool for both CAS and primary sites. This tool can should help you fix issues when in-console updates have problems downloading or replicating.

The CMUpdateReset.exe is a command line tool. The CM Update Reset tool is found in the \cd.latest\SMSSETUP\TOOLS folder of the site server.

When to use CM Update Reset Tool ?

First of all you must know when to use the reset tool. You must use this tool when an in-console update has not yet installed and is in a failed state.

What is a failed state – A failed state means that the update download is in progress but stuck or taking an excessively long time. At this stage when you right click an update, you see all the options greyed out.

Prior to using this tool, try restarting the SMS executive service. But if that doesn’t help and you still see the SCCM update stuck at downloading state, use the CMUpdateReset.

The update reset tool runs against the update that you specify. Another important point is the tool does not delete successfully installed or downloaded updates.

The CM update reset tool requires the account to have following permissions to run properly :-

How to use SCCM Update Reset Tool

Let me present two scenarios that will help you decide which command to run.

Scenario 1 – You notice that update is stuck in downloading state. So the easiest way to reset an update in this situation is to use below command. P is the package GUID.

Scenario 2 – You run the command mentioned in Scenario 1 and yet you see the issue still remains. The below command force deletes the problematic update package. P is the package GUID.

Note – If the update package is in a post download state, the tool does not clean up the package.

How to Fix SCCM Updates Stuck in Downloading State

I noticed the SCCM update was stuck at downloading state while I was installing Configuration Manager Technical Preview 1905. 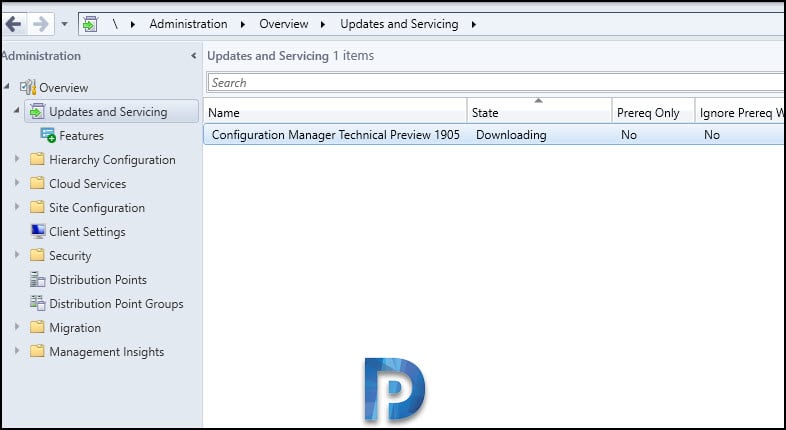 I checked the EasySetupPayload folder and noticed cab file of size 438MB. In the other folder i didn’t see any files.

After waiting for more than 30 minutes, the console still showed the update status as Downloading.

So I decided to run the CMUpdateReset tool. I just wanted to reset the update, so i ran the below command. 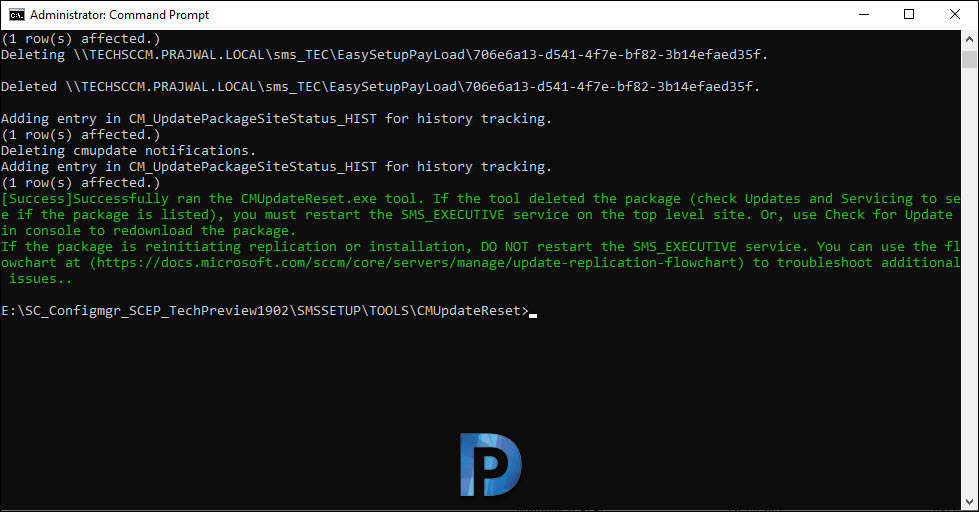 The update disappeared from the console. Now i restarted the SMS exec service. When I checked for the updates, I did see the update was again available in console showing Available for Download. This time the update downloaded successfully. 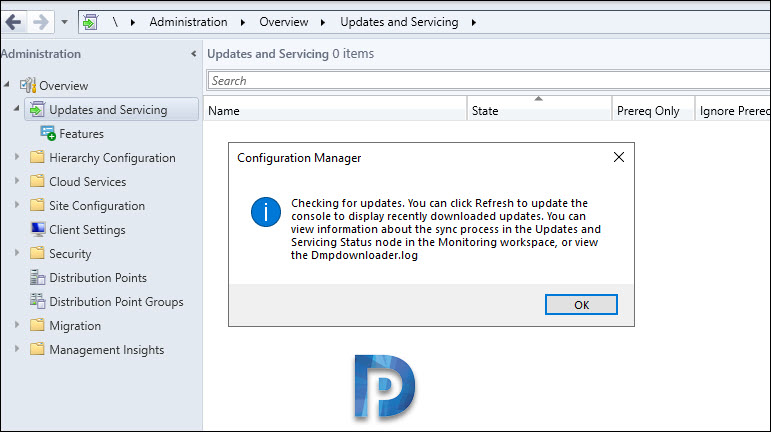 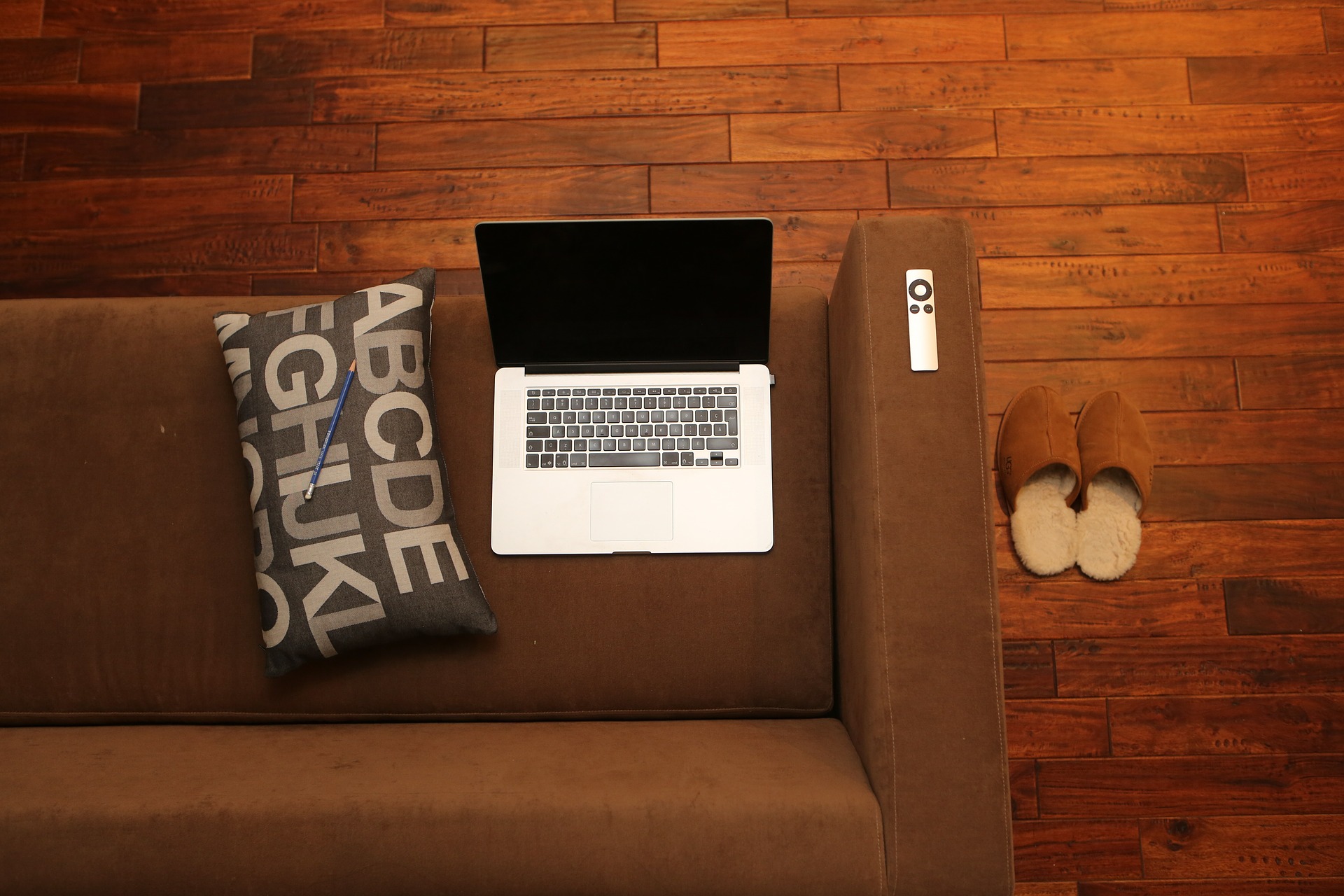 How to Enable Remote Desktop on SCCM CMG 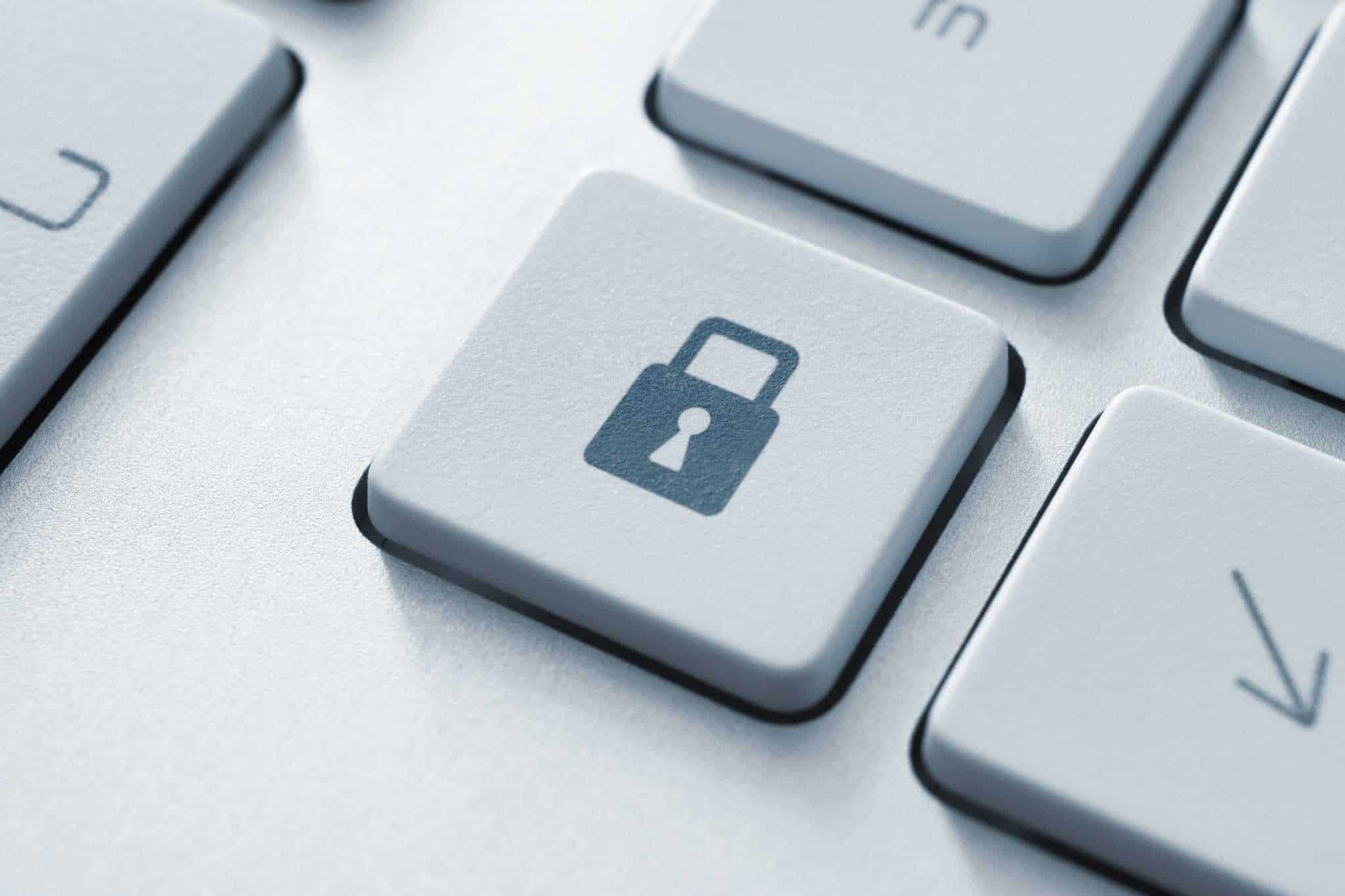 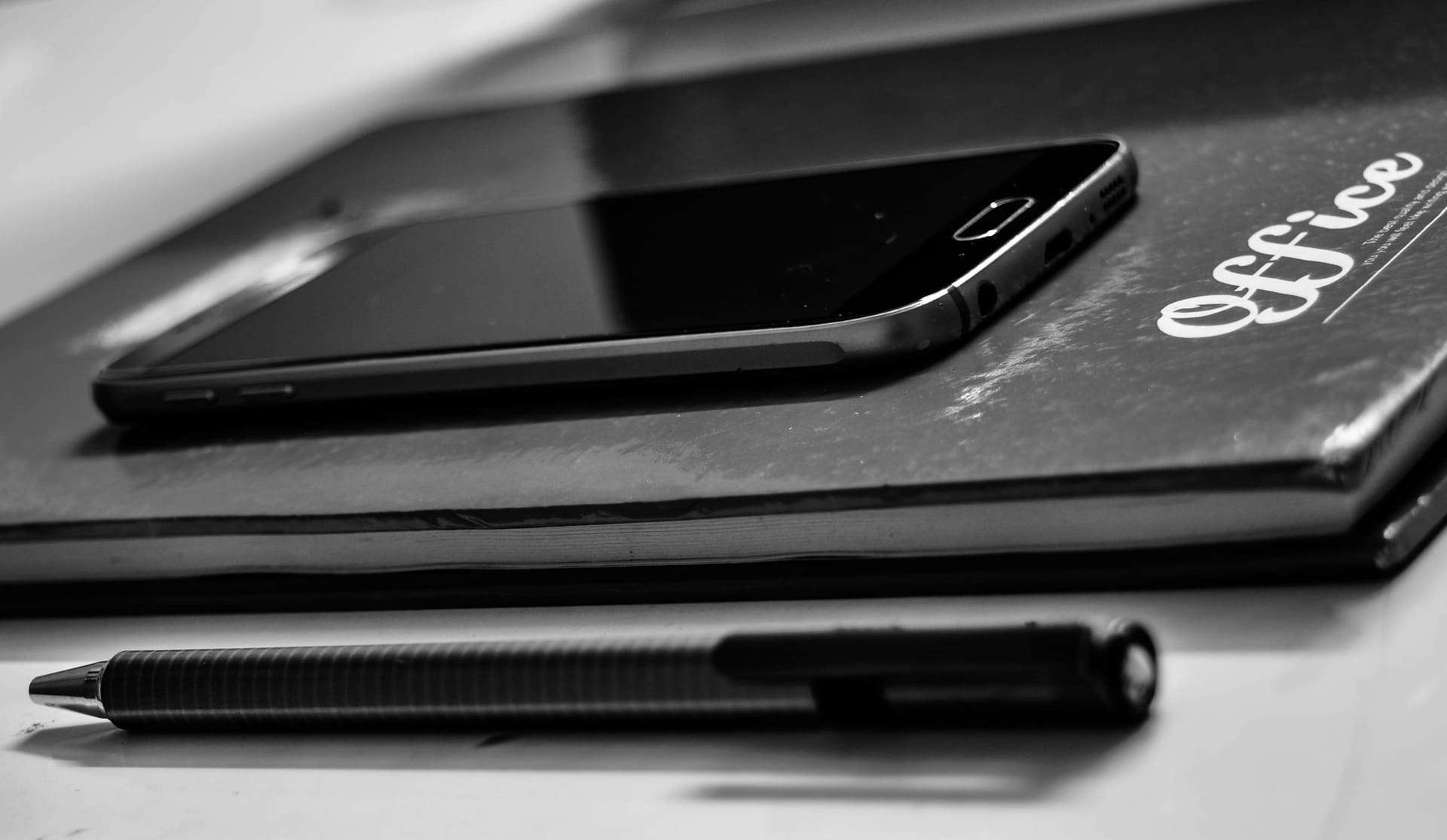 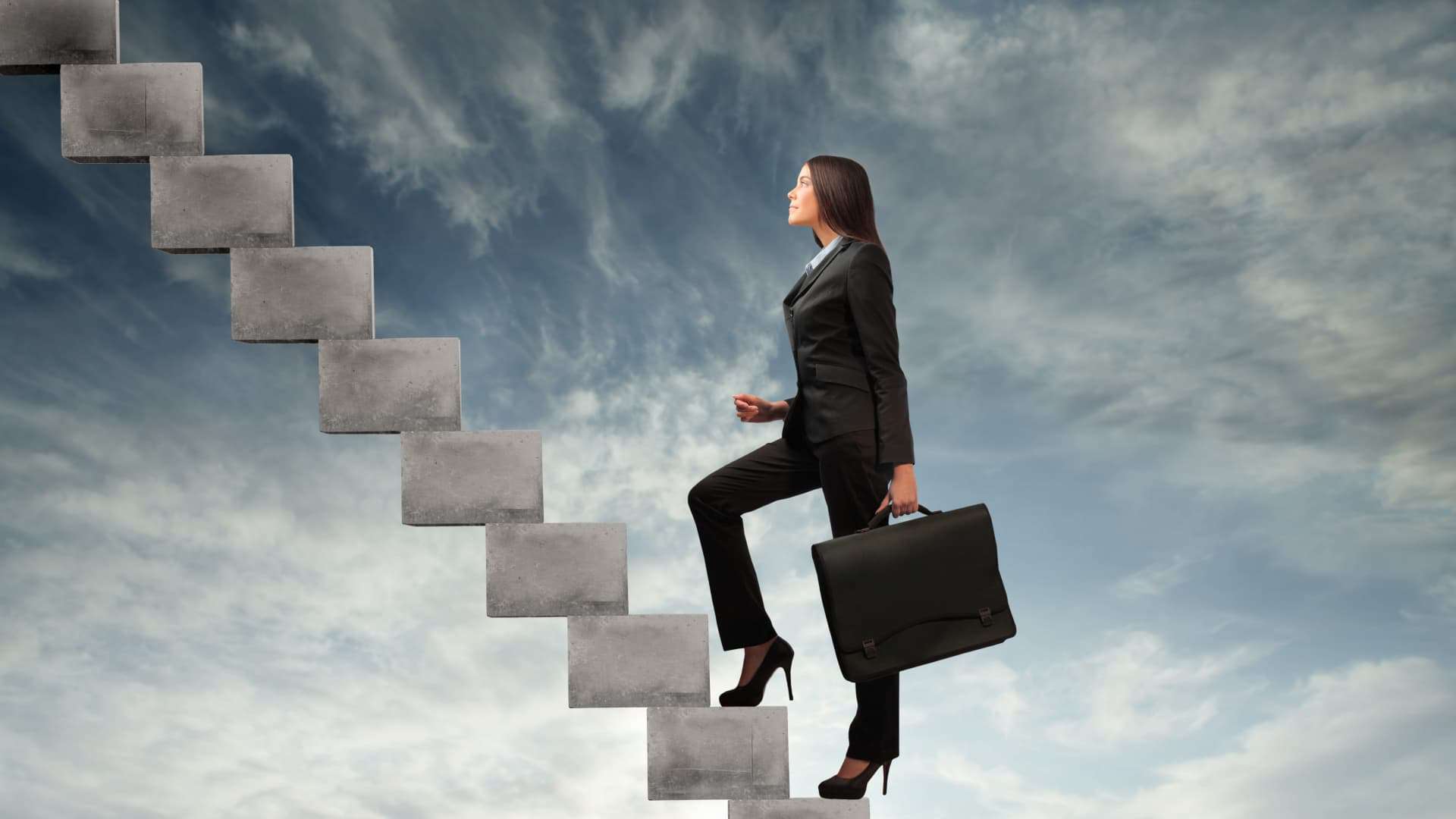 Hi, I am Prajwal Desai. For last few years I have been working on multiple technologies such as SCCM / Configuration Manager, Intune, Azure, Security etc. I created this site so that I can share valuable information with everyone.
Recent Posts
Advertisement
Recent Comments
Most Commented