1) Using ver (Version) command – The ver command lists the version of windows OS. As you can see from the below screenshot that this command will show only the version of Windows OS. It doesn’t list the name of the operating system or service packs installed. 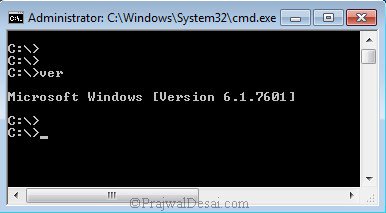 When you execute the above command you get the output as shown in the below screenshot.