When you download the mac client agent and when you run Macclient.dmg file on your Mac computer, you will see Ccmsetup and CMClient.pkg are extracted and also there is a folder named Tools that contains the CMDiagnostics, CMUninstall, CMAppUtil and CMEnroll tools. Let’s look at what each of the tools do.

Ccmsetup – This is the main app which installs the Configuration Manager client on Mac computers.

CMDiagnostics – This tool is used to collect diagnostic information related to the Configuration Manager client on Mac computers in your organization.

CMUninstall – This application uninstalls the Configuration Manager client from Mac computers in your organization.

CMAppUtil – Use this tool to convert Apple application packages into a format that can be deployed as a Configuration Manager application.

CMEnroll – Use this tool to request and install the client certificate for a Mac computer so that you can then install the Configuration Manager client.

How to uninstall SCCM Client Agent from Mac Computers

On a Mac computer, open a terminal window and navigate to the folder where you extracted the contents of the macclient.dmg file that you downloaded from the Microsoft Download Center. Navigate to the Tools folder and enter the following command-line:

The -c property instructs the client uninstall to also remove and client crash logs and log files. This is optional, but a best practice to help avoid confusion if you later reinstall the client. 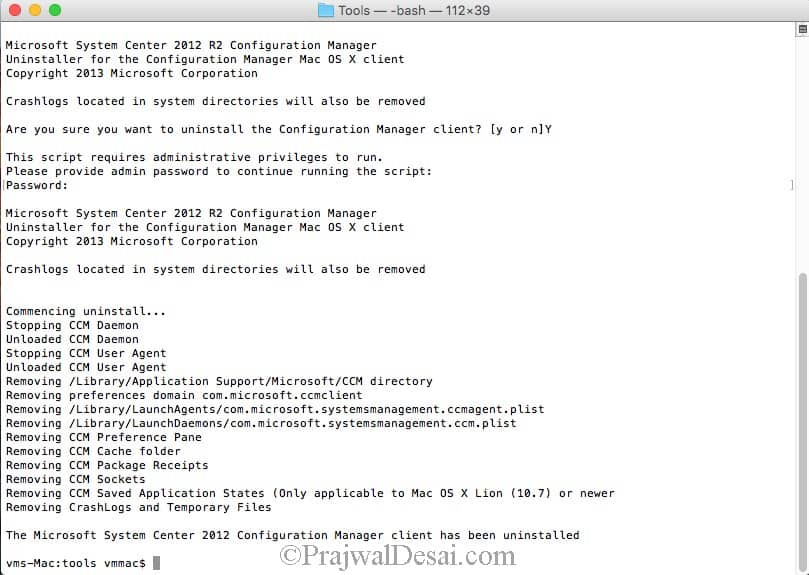