Upgrade SCCM 1511 to SCCM 1606 without Powershell Script – With the release of SCCM current branch version 1606, users now have the option to upgrade to SCCM 1511 to SCCM 1606. Well, the configuration manager current branch 1606 brings new features and lot of improvements over previous version. In one of my posts, I had posted the steps to upgrade SCCM 1511 to SCCM 1606. I remember running a powershell script to get the update quickly. Post running the script the 1606 update appeared in Updates and Servicing node. Recently a lot of users complained that even after restarting the smsexec service, the update was still not available. A very few were successful in getting the update. I had to test this in my lab setup to confirm the result.

Most of the users started to look for the script to get the 1606 update. I believe this script is not required anymore. You cannot download it as it has been removed from downloads by Microsoft. Microsoft announced in the blog post that the update is now globally available to all customers. The script to enable the first wave is no longer necessary.

So if you are not seeing the update 1606 in updates and servicing node, here’s how you can get it. Starting with Configuration Manager 1602, when you right click on Updates and Servicing node, you see an option called Check for Updates. This option is not available if you are running SCCM 1511. So to begin the download process, open services console on site server and restart the SMS_EXECUTIVE service once. 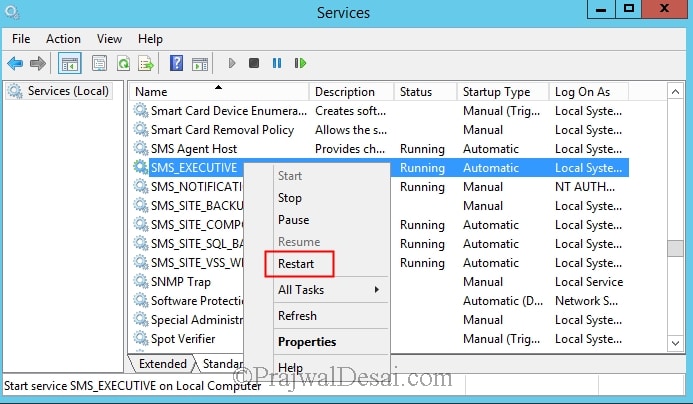 Open the dmpdownloader.log file. When you restart smsexec service you see the below lines in log file.

Notice that after few minutes, the download process starts. The required files are downloaded.

When you refresh the updates and servicing node you see that Configuration Manager 1606 update state shows downloading. You need to be patient here until the update is downloaded.

Once again dmpdownloader.log file is really useful in checking the download progress. In the below screenshot you see the the download is complete. You are now ready to install the update. So to all those who say starting smsexec service won’t help, this posts should help :).