What is Meltdown and Spectre ?.

Meltdown and Spectre vulnerabilities affect modern computers leak passwords and sensitive data from them. Meltdown breaks isolation between user apps and the OS. Spectre breaks the isolation between different applications. Meltdown is more easy to patch as we have patches available but Spectre is harder to figure out and patch.

So if your question is should i care about this thing ?. Probably Yes, because these are CPU flaws and there is a high chance that your system could be exploited. Most of all you cannot find whether these exploits have been run against your computer. This is because the exploits do not leave any traces in log files. When you understand how critical this is, every organization must secure windows systems against Meltdown Spectre CPU Flaws. I also want to add that these vulnerabilities affect your PC’s, mobile devices, and machines in the cloud.

Where can I find more information about patching Meltdown and Spectre

Here are some of the links that should help you. These vulnerabilities are also referred as speculative execution side-channel attacks.

How to Secure Windows Systems against Meltdown Spectre CPU Flaws

Before you plan to secure windows systems against Meltdown and Spectre CPU flaws, I would like highlight few things.

If you are prepared to roll out the patches to your organization, the easiest way is to check for Windows Updates. Most of the required patches should be downloaded through windows updates. However you could visit Microsoft Update Catalog site and search for KB number and download the patch. You could then use SCCM or other tools to push these updates to computers.

Checking the Status of patches

I will show you some steps that will help you to check status of these patches. To verify that protections are enabled, Microsoft has published a PowerShell script. With this script we will determine how safe is our computer against these vulnerabilities.

Run the PowerShell as administrator and run the below command. This command installs speculation control module.

Type Y to proceed with install.

Once the module is installed, type the below command. This command checks your systems and shows the speculation control results.

You shouldn’t worry about the lines that are green. Those are the ones fixed by patches installed via Windows Update. So I suggest you to perform windows update once. The red lines are the ones that needs attention. These are not fixed by installing any software updates.

In my case I went to Dell support site and checked for latest BIOS updates. Yes there was one available. So i downloaded it, upgraded my BIOS and rebooted the laptop. Ran the speculation settings and it was all patched.  I am now working on upgrading BIOS on other laptops using SCCM across organization. 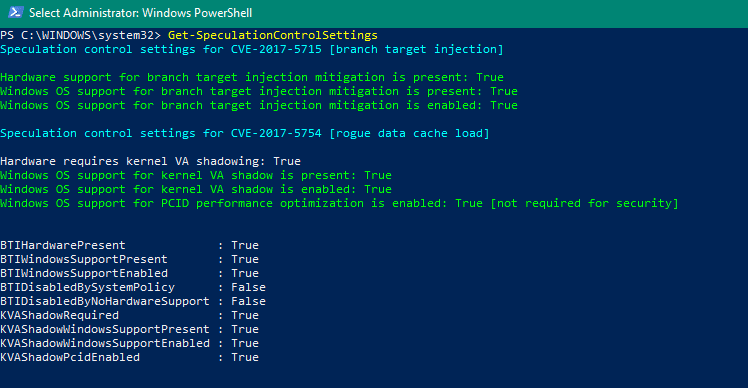