Google One is the new name for Google Drive storage plans. Google has renamed Google drive storage plans to Google One. It’s just not a move to change the name, it also introduces cheaper cloud storage plans. In addition you get an option to add up to five family members to your plan. This allows the customers to choose the plan based on requirements. With new storage plans in place, the prices have also been reduced.

Note that Google One is not available everywhere. It is currently available in US and shall be available in other countries soon. The users in US can sign up for Google One now. For existing Google Drive users, they just need to go to Google Drive and select Storage and then click on the Upgrade Storage option.

As per Google, Initially, Google One will only be available on a limited basis. If you have a paid Drive storage plan, you’ll be automatically upgraded to Google One over the coming months. We’re working on making Google One more widely available.

First of all let’s see the Google drive storage plans. Totally there are seven storage plans (prices in screenshots are in INR). 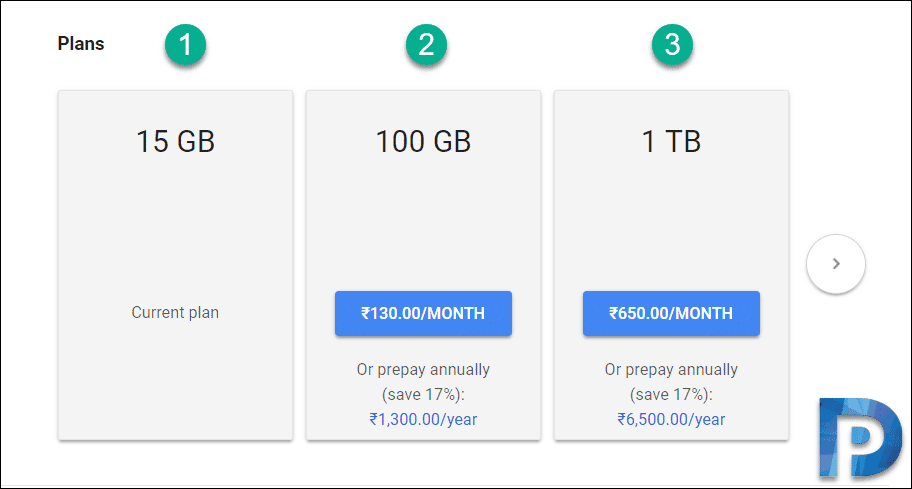 So let’s see the Google One plans and how are they priced. Google One plans start at the same place as Google Drive plans. The basic plan for 100 GB still costs $1.99 per month. However there are some new plans introduced after basic plan. The next plan is 200 GB which costs $2.99 per month. A big advantage for consumers who can now upgrade from 100 GB to 200 GB. While with Google drive the very next plan after 100 GB was straight 1 TB.

So to briefly summarize Google One plans, here are the storage tiers.